The US chief executive of Volkswagen has said the company has “totally screwed up” over the emissions scandal that has rocked the automotive industry.

Michael Horn admitted at an event in Brooklyn, New York, on Monday night that VW had been dishonest with regulators and the public. 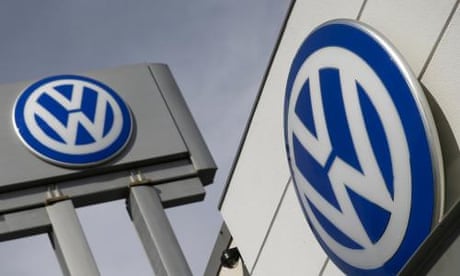 The world’s second-biggest carmaker could face a fine of up to $18bn (£11.6bn), criminal charges for its executives, and legal action from customers and shareholders due to US claims it used a defeat device to falsify emissions data. The device recognises when the car is being tested and immediately cuts emissions to a level that is much lower than normal and unsustainable under usual driving conditions.

Shares in Volkswagen fell by another 5% on Tuesday after losing almost a fifth of their value on Monday..

In further developments, France’s finance minister called for a “Europe-wide” investigation into diesel cars to “reassure” the public.

Michel Sapin told French radio: “This is not a minor subject, it’s not about speed or the quality of leather. What we are dealing with is making sure people avoid being poisoned by pollution.”

South Korea said on Tuesday it would investigate emissions of the VW Jetta and Gold models plus Audi A3 cars produced in 2014 and 2015. If problems are found, South Korea’s environment ministry said its inquiry could be expanded to all German diesel imports, which have surged in popularity in recent years in a market long dominated by local producers such as Hyundai.

In addition, the US Department of Justice could conduct a criminal investigation into Volkswagen.

Horn, speaking at an event to launch a new version of the Passat sedan, which featured rock star Lenny Kravitz, said: “Our company was dishonest with the EPA, and the California air resources board and with all of you, and in my German words: we have totally screwed up.

“We must fix the cars to prevent this from ever happening again and we have to make this right. This kind of behaviour is totally inconsistent with our qualities.

“We are committed to do what must be done and to begin to restore your trust. We will pay what we have to pay.”

The comments from Horn are the first in public by a senior VW executive since the scandal emerged, although the company apologised on Sunday. He left the event without taking questions.

One of the officials involved in uncovering the alleged behaviour has told the Guardian that the emissions-fixing scandal could extend to other companies and countries.

Billions of pounds have been wiped off the value of global carmakers amid growing concerns that emissions tests may have been rigged across the industry.

“We need to ask the question, is this happening in other countries and is this happening at other manufacturers? Some part of our reaction is not even understanding what has happened exactly,” said John German, one of the two co-leads on the US team of the International Council for Clean Transportation (ICCT), the European-based NGO that raised the alarm.

The US Environmental Protection Agency (EPA) said on Friday that VW hadinstalled illegal software to cheat emission tests, allowing its diesel cars to produce up to 40 times more pollution than allowed. The US government ordered VW to recall 482,000 VW and Audi cars produced since 2009.

In response, Martin Winterkorn, chief executive of VW, said in a statement on Sunday he was “deeply sorry” for breaking the trust of the public and ordered an external investigation.

A British expert in low-emission vehicles claimed the manipulation of air pollution data could be widespread and that tests in Europe are “much more open to this sort of abuse”.

Greg Archer, a former government adviser and head of clean vehicles at the respected Transport & Environment thinktank, said: “I am not surprised. There has been a lot of anecdotal evidence about carmakers using these defeat devices. All credit to the EPA for investigating and finding the truth.”

Archer, the former managing director of the UK’s Low Carbon Vehicle Partnership and non-executive director for the government’s Renewable Fuels Agency, said the scandal could spread into petrol cars and CO2 levels. “It is probably not limited to diesel and not limited to emissions,” he added.

The devices are thought to work by injecting more urea – an exhaust fluid – into the car when it is being tested. This limits nitrogen oxide emissions to a fraction of their usual level. The car detects it is being tested because devices such as the anti-collision systems have to be turned off when it is in the laboratory. The extra urea is not injected into the car when it is on the road because it would quickly run out.

Archer claims European tests are more open to abuse because they are conducted before the car goes into mass production and by companies that have been paid by the carmakers. These testing companies have been verified by regulators in each country, such as the Vehicle Certification Agency, but in the US the tests are conducted by an independent body.

Industry leaders in Britain claimed there was no evidence that manufacturers are cheating the system in Europe but admitted it needs to be reformed.

Mike Hawes, chief executive of the Society of Motor Manufacturers and Traders, the industry trade body, said: “The EU operates a fundamentally different system to the US – with all European tests performed in strict conditions as required by EU law and witnessed by a government-appointed independent approval agency. There is no evidence that manufacturers cheat the cycle.

“The industry acknowledges, however, that the current test method is outdated and is seeking agreement from the European commission for a new emissions test that embraces new testing technologies and is more representative of on-road conditions.”

The US allegations involve a series of diesel cars produced by VW and the brands it owns, such as Audi. These include the Audi A3, VW Jetta, Beetle, Golf and Passat models. VW has halted sales of these models.